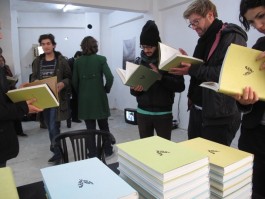 APOGEE – a compilation of solitude, ecology and recreation (nüans)

APOGEE gathers more than 80 contributions by artists and authors dealing with the topics of isolation, island life and incredible selflessness.

APOGEE is the place in the universe that is the most distant to the earth and is a mathematical quantity and allegory for absolute seclusion. In March 2010, nuans was located in three different time zones. Thus the search of ideas and material for a book project started. Further relocations followed and with each city we hit upon further ideas, people and contributions. Gradually, an expansive archipelago has developed.  In the end APOGEE gathers contributions of 80 artists and authors dealing with the topics of isolation, islands and fluctuation.

As if everything stands still

You brought the island metaphor into play after only a few weeks at Villa Romana, when I asked you for a statement for our image brochure. You then continued working with this theme in the “Apogee” project, in which the island/isolationtheme was approached from various perspectives. Why did your stay here lead so soon to this theme?

The Villa is an artificial situation; it is a German establishment in Italy for artists who are all provided with a grant. They have none of the problems of everyday life here; they don’t have to pay electricity bills. In many respects, Villa Romana is a protected space, in the most positive, ideal sense – a free space.

But of course when people talk about an island, they also think of it being surrounded by water ...

Yes. But when we were working on the book for “Apogee”,we immediately thought in many different directions: about the island as a place of retreat, as a place of yearning; one chapter is also about sleep and wellbeing. A place that is completely cut off would of course be a horrific prospect. And indeed, many horror films are set on islands.

So you worked through what an island and isolation could mean for an artist?

Yes, we are still working on that. The book has six chapters. At the beginning it is about how everyone works alone on their own accord, observes and comes to decisions alone; then it is about island societies, about recovery, ecology and integration. Whether we also include the science fiction aspect still depends on the corresponding input.

So the island as an emergency situation became the catalyst for reflecting on artistic self-image, the figure of the artist? What does he need?

Yes, the project is also a counter-pole to the idea of total network and transparency. Our starting point is this: that everyone who wants to accomplish something must first of all take a step back.

It refers to “nüans”, which is made up of Elmar Hermann, Maki Umehara and me, an interdisciplinary artist project